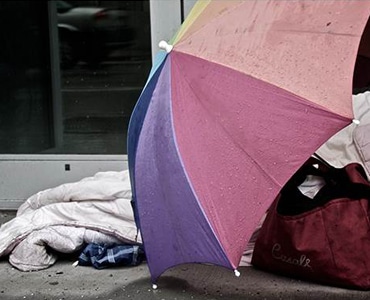 I wrote this personal experience blog when I was CCO of Tumbleweed, working with homeless youth.

TEMPE AZ If you are going to help homeless youth, you have to find them first. My mission was to see how the Tumbleweed Street Outreach team accomplishes that job on the streets of Phoenix each night, exploring the backspaces and darkened parks where young people, homeless and alone, are most likely to seek refuge.Outreach leader Rachel Ortiz, a 20-something street-wise native Phoenician with a Masters in Social Work, says sometimes the young homeless can be found in unlikely places. The best way to find them quickly is to ask homeless adults. “The pros,” she calls them, with rueful affection. Her team of three includes Amy, a young part-time outreach worker and college student, and Victor, a 30-year-old Army vet who was deployed to Afghanistan.

Outreach leader Rachel Ortiz, a 20-something street-wise native Phoenician with a Masters in Social Work, says sometimes the young homeless can be found in unlikely places. The best way to find them quickly is to ask homeless adults. “The pros,” she calls them, with rueful affection. Her team of three includes Amy, a young part-time outreach worker and college student, and Victor, a 30-year-old Army vet who was deployed to Afghanistan.

7:20 PM   Rachel is very polite approaching homeless strangers. “They want respect,” she said.  “Everybodydoes, but for them it’s one of the few things they can ask for that doesn’t cost anyone anything.”   She struck up a conversation with a chronically homeless man named Jon as he pushed a loaded shopping cart with what appeared to be everything he owns. Rachel offered him snacks and water and asked if he knew where younger homeless people might be hanging out.

Rachel guessed correctly this meant the upside-down pyramid-shaped Tempe City Hall building, and her team of three head that way and deep into the cold, wet night.  At least the rain had stopped.

7:52 PM Sitting quietly in the dark under dripping paloverde and mesquite trees was a group of shadows….the homeless. Rachel always calls out as she approaches a group. “Hello! Good evening!” she says. “How is everybody doing? Staying dry?” A few respond more or less cheerily, and she soon learns that we are among a group of seven people, three of whom are in the Tumbleweed age group of under-26. They are 24, 23 and 19. They know each other only from the street.

Rachel and her team are careful to be sure everyone gets a little something to eat and drink or a few basic supplies,such as a small towel or toothpaste, whether or not they are in the Tumbleweed age group.

“We feel for them all,” she says. “We might not be able to bring an older person into our program but we can show them where to get help, and it would be so disrespectful to give younger people some basics and ignore the older ones.”

Besides, she says, people talk, and she wants Tumbleweed’s rep on the street to be positive, helpful, giving.

8:20 PM Time to go. Rachel says tonight was her first time seeing the three young people we met in the tiny grove. “I’ll be looking for them from now on, start building up a relationship.”

The street team told me they often have to meet the same individual over and over again, as it takes time for enough trust to grow that the youth accepts an offer housing or access to Tumbleweed’s Centers, where they can receive fresh clothing and a shower.

Rachel says youth on the street are sometimes unable to break away from the people they have become used to…in essence, their street family…and what little safety they feel comes from being associated with the group. Walking away is difficult for many.

The three young people we met tonight each have a different life story but are reluctant to share it with strangers, at least for now.  Even if the stranger is offering help, food, and water.

“Whatever their background, they are not homeless by choice,” Rachel adds. “Their stories usually involve dysfunctional home lives, substance abuse by parents or guardians, crappy group homes, parents who disappeared or are in prison, maybe they themselves have a minor criminal record which makes it almost impossible to get work or rent an apartment, and there is physical abuse, emotional abuse. It runs the gamut.”

9:00 PM We meet a homeless transgender woman on Mill Avenue, a tall athletic youth named Angela, who was entirely alone and clearly, said Rachel, very vulnerable. The street team talked to her about our Emergency Housing Program, where particularly needy homeless youth can get off the street right away. “If we have room,” she says. “There are  only 30 beds.”

Angela is in luck. The program has an opening and th team offer to drive her the five mile to the facility, a renovatedmotel on East van Buren, but she declines, at last for tonight. We gave her the contact information if she changes her mind.  “She is in danger out here,” Rachel says. “We’ll see her again. I hope.”

Tomorrow: We talk with patrolling police officers, who have a complex relationship with homeless young people.